Michael Visconti covers Max DFS Lineup,Value picks and streamers for Week 5, Adam eats ice, and people who eat fritos and chili-cheese. This life ain’t for everyone.

At halftime of the MNF game I think it is pretty safe to say we escaped Week 4 without any major season ending injuries. This is clearly the quietest and the slowest free agent week of the year. Still we will find some diamonds in the rough.

It is a great time to start anticipating our needs during the bye weeks. Do you have the best defensive matchup or best kicker matchup for when your bye weeks occur? There is no sense on waiting until the last minute considering that you will have to spend up to get the juicy matchup the week of.

Last week I talked about taking a flier on a guy that has the opportunity to start should another injury occur. That logic still makes sense. Look at our players to watch as a potential list of names of players to grab. If it doesn’t work out, you can always drop them.

Carson Wentz PHI – Rerunning this from last week. He may have gone overlooked with his bye week. Carson went 23 of 31 for 301 yards and 2 TDs in Week 3. Carson plays Detroit this week and sees a handful of favorable matchups over the next 6 weeks.

Brian Hoyer CHI – *Deep league only option, but Hoyer is not that bad. He was partially the cause in DeAndre Hopkins excellent 2015 campaign. I love Hoyer again this week if Cutler is out as they face Indianapolis.

Orleans Darkwa NYG – Watching this MNF game as I type this has me recognizing how great the Minnesota defense really is. They Giants can’t do anything tonight. Orleans is the #1 RB when Rashad Jennings is out. Paul Perkins did shake off a couple of tacklers on a 67 yard screen play on MNF.

Bobby Rainey NYG – Bobby will likely get a big increase in snaps in this pass heavy offense and I like him to get most of the Vereen/Jennings pass targets for the upcoming weeks. He is a sneaky add in deeper 12+ team PPR leagues now.

Zach Zenner DET – Next man up. The 2015 preseason darling is the next guy in line if Dwayne Washington is unable to get suited up. I don’t like the Lions matchups over the next 6 weeks, but if you are desperate to add a guy he may be in line for carries if Wash’s foot is worse then being reported.

Wendell Smallwood PHI – Another rerun from last week as he may have gone overlooked last week as they were walking into a bye week. Wendell looked pretty good in Week 3 as the lead back and out carried Kenjon Barner 17 to 8 after Mathews left the game.

Terrance West BAL – Terrance was great this last Sunday. He is a bruiser. I am not super high on him, but as they ease Dixon back in he will be the clear cut #1 RB in Baltimore. Things got a little clearer when they made Forsett a healthy scratch last week and we saw what the results could be. I still like Dixon to take over soon.

Kenneth Dixon BAL – It is clear that somebody will need to take over this backfield and Dixon is the most talented back here. He will be returning from a torn MCL at some point in October and should step into the #1 RB spot in Baltimore.

DeAndre Washington OAK – Latavius again only had 8 carries to DeAndre’s 5. Game flow had a lot to do with the totals, but please note that this is a total time share and Washington is available in a bunch of leagues. He could be the guy to own down the stretch.

Brice Butler DAL– Brice was the guy that took over for Dez last year when he was hurt. I just don’t remember him being this big and physical. He looked like a fairly good receiver this weekend against SF. He grabbed 5 balls on 9 targets for 41 yards and a TD. Not huge stats, but it’s the way he looked that put him on this list. If Dez misses more time he will be a decent bye week plug in.

Jeremy Kerley SF – I had a Kerley, John Brown, Julio DFS team then I changed it all out in the last hour. I was onto something. Kerley played really well in the Sunday match up versus the Cowboys. He had 3 times as many targets as the next SF wide out. He hauled in 6 receptions for 88 yards and a TD.

Dontrelle Inman SD – Well I knew eventually he was going to have a breakout game. Warning: he is not going to play this well every week. He is however, on the heaviest volume offense in the league.

Robert Woods BUF – With Sammy Watkins shelved for possibly the entire 2016 year Woods finds himself as the receiver with the most experience on this team. We drafted him in a couple of leagues in the FFPC not believing in Watkins being healthy. We were right, but we forgot that doesn’t make Woods a great talent. He should get plenty of looks in this offense though.

Sammie Coates PIT – Everyone cooled off on Coates in the preseason with the emergence of Eli Rogers. Rogers hasn’t looked very good and is now dealing with turf toe. Markus Wheaton has cement hands and Roethlisberger has stopped targeting him (1 in Week 4). Coates looks to be the June-July sleeper we all talked about this summer. He caught 6 of his 8 targets for 79 yards and I expect him to continue to be in action week to week.

Hunter Henry SD – We told you so. If Hungry Hunter is still available run don’t walk, go get him.

Kyle Rudolph MIN – If he is still available he too is a must add. Who knew? All that Rudolph needed was Sam Bradford and he looks great.

Cameron Brate TB – Brate continues to get a bunch of looks with ASJ gone. He will continue to get volume and be a red zone weapon for Winston.

Gary Barnidge CLE – He may have been dropped too soon in your league. Gary and rookie 3rd stringer Cody Wessler have begun to ramp up into some decent production. Barnidge caught all 7 of his targets for 57 yards in Week 4. 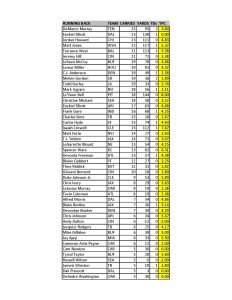 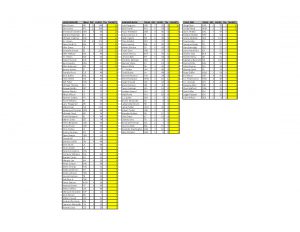