Looks like the Minnesota Vikings came to their senses and decided to ride their horse. Adrian Peterson led the NFL with a total of 29 carries. What doesn’t show in the stat line is the touchdown he scored which was called back.

TJ Yeldon also had a TD that was called back as he lands in the #2 spot for this week’s total carries. TJ looks to be carving out a nice little role in Jacksonville, and with Julius Thomas coming back from a hand injury and after the monster game from Allen Robinson I would expect the holes to open a little bit. I am looking forward to this offense mid-way through the year, or maybe I am just drinking the teal juice.

CJ Anderson had 12 carries to Ronnie Hillman’s 9 for week 2. That whole situation is a mess.

More notables were Matt Jones getting more carries (19) then Alfred Morris (18). There will not be that many carries to go around each week, but I Matt clearly looks like a better running back thus far.

Chris Polk ended up leading the Houston offense with 14 carries. He also had 8 receiving targets, don’t spend all your FAAB on him just yet, but he is clearly the shiniest piece of garbage in that scrap heap of a backfield.

Running back by committee was in full effect for week 2, my favorite. Enjoy. 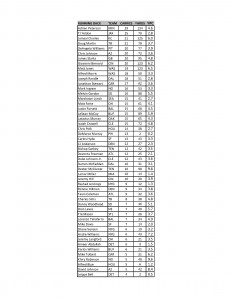