Probably my favorite report every week is when I get to compile the targets to catch percentages. I watch every single game on Sunday through Monday to break down the schemes and most importantly how teams are going to utilize their skill players in specific game situations. It always surprises me the names that show up each week. There are definitely some mainstays, but there are always new names every week.

20 receptions for Julio Jones in Week 3, are you kidding me?

Mike Evans is back with 17 targets, but only hauled in 7 of the rookie Jameis Winstons’ passes.

Keenan Allen will be a 100 catch guy this year, easily.

Steve Smith caught 76% of his 17 targets. Will he be able to keep that going for his entire final year? The Raves have nobody to throw the ball too. Ravens rookie tight end Maxx Williams had 7 targets though and we will keep an eye on his progress the next several weeks.

Jeremy Kerley had 11 targets and of course, Quincy Enunwa was targeted 10 times. Huh?

Gary Barnidge, tight end for the Browns finished in double digit looks with 10.

Leading the running back list is Chris Thompson with 11 targets for the Redskins. Who the? 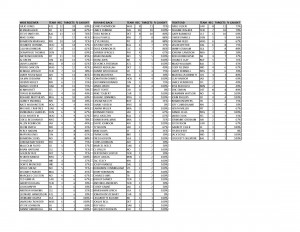