Some of these are truly deceiving. I absolutely will not fall for the Alfred Blue stat line and neither should you. He led the NFL with 31 carries and had a decent week. One of the golden rules of fantasy football is not to chase points. Do not start him next week just because you missed his points this week. With that, Blue’s performance was the best yet by any Texans running back and if he is available in your leagues due to being dropped he might be worthy of a stash, just don’t expect that performance to be duplicated all year.

Devonta Freeman went 30 for 141 and 3 Touchdowns. Wow, our 32nd ranked offensive line did OK. Just goes to show how valuable Julio Jones is, or how big of cream puffs the Dallas defensive line is.

The Eagles gave Ryan Mathews the ball 25 times. Our sleeper call of Ryan Mathews being a better fit for this offense than DeMarco Murray is beginning to come to fruition.

All in there were only 7 out of 32 teams that had a running back go over 20 carries. “The times they are changing.” 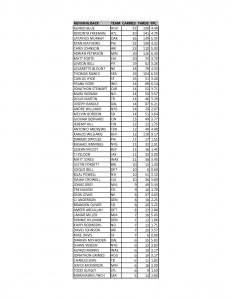