Our weekly projections are created using various sources and tweeked up until Saturday night. Projections being posted means our cheatsheets for Draft Kings are also ready for this week. Dive in!

Click here to read more and purchase our 2022 season membership now for only $9.95.

Click here to read more and purchase our 2021 season membership now for only $9.95.

Our weekly projections are created using various sources and tweeked up until Saturday night. Projections being posted means our cheatsheets for Draft Kings, Fanduel and Yahoo are also ready for this week. Dive in!

Welcome to Championship Week! If you are still in the running congratulations! Your team at this point should be solidified, but here are some streamers if you are desperate in the championship week.

Good luck and Merry Christmas to all! Please remember the bulk slate of the games are on Saturday due to the way that the holiday lands this week.

Here are the stream options for Week 16:

Justin Forsett DEN – Justin led the Denver backfield with 10 carries and 5 targets this Sunday. He is not really recommended in the championship week in a tough rematch in Arrowhead. I can see Forsett gaining 6-8 points in full PPR leagues, but he won’t get much done on the ground.

Ty Montgomery GB – Ty took advantage of his first opportunity as a “true” running back as anointed by Mike McCarthy earlier last week. I would expect him to have another solid week with Minnesota showing their true colors as of late.

Dwayne Washington DET – I can’t see Dwayne having a monster game in Dallas but he will get around 15 carries and a few targets.

Robby Anderson NYJ – Once again Robby and Petty show that they have a great connection and timing. After Petty took a monster hit which resulted in a nasty bruise, it’s tough to say if that will continue this week. One thing is for sure they will be throwing A LOT this weekend against the Patriots.

Dontrelle Inman SD – The only show in town is Tyrell Williams and Dontrelle Inman with 9 and 8 targets. Inman has a great matchup this week against the Browns and I would feel comfortable with him as my WR3.

Tyler Lockett SEA – There he is. Right on time. Lockett had a great game while leading the Seahawks in targets with 9. He caught 7 of them for 130 yards and a TD.

Ryan Griffin HOU – With Fiedorowicz still out with a concussion Griffin is seeing more volume. He also sees targets from Tom Savage where they did a lot of team 2 work through the year. Check in later to see the status on Fiedorowicz and Osweiler, but this could be a great opportunity for a streamer TE.

Charles Clay BUF – Clay caught all of his 7 targets this week for 72 yards and a TD. We like the matchup this week at home in Buffalo versus Miami. 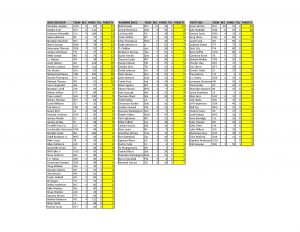 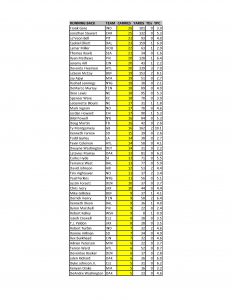 This is actually a decent waiver wire week if you need to find a starter for week 15. Below are a few of our favorites.

At this stage of the year rather than suggesting a rest of the way Quarterback pickup we will be offering our best streamers in order of our weekly standard rankings. Here are the stream options for Week 15:

Kenneth Farrow SD – Melvin Gordon left Sunday’s game killing a lot of fantasy seasons with an injured hip. Farrow played after offensive snap in his absence and did OK. There has been talk of a Ronnie Hillman time share, but he’s not very good. I’ll take Farrow.

Justin Forsett DEN – Straight off the street Justin lands a starting gig. Kind of. He led the way in Denver and as Booker is on the decline look for Forsett to be involved over the next couple of weeks.

Ty Montgomery GB – Mike McCarthy declared Ty a running back today. He looked pretty good on Sunday against the Seahawks and he has a decent flex matchup this upcoming week against the Bears.

Kenjon Barner PHI – Well, here we go again. Smallwood is on the IR and Sproles is in the concussion protocol with Mathews fresh back from injury. Barner will see an increased workload this week against the Ravens should Sproles miss the game.

Bilal Powell NYJ – Powell is likely taken in most of your leagues but with the uncertainty on the severity of Matt Forte who is dealing with a knee injury Powell would be a great pickup for a Week 15 start.

Kenneth Dixon BAL – Dixon ran really strong on MNF against the NE Patriots. He really looks to be like a really talent in this backfield. Look for him to have 1 big game before the end of the year solidifying himself as the lead back in Baltimore. It might come this week versus the Eagles.

Pierre Garcon WAS – Pierre has been showing up in this offense as of late and I love his Monday Night Football matchup this week. Start your Redskins!

Ted Ginn Jr. CAR – You could do worse if you are in a long TD league and need a flex play. I like him in a MNF shootout this week against the Redskins.

Malcolm Mitchell NE – Mitchell scored again on Monday night. He is quickly becoming a mainstay in the Patriots offense. He might be the fantasy rookie Wide Receiver of the year when it is all said and done.

Robby Anderson NYJ – Robby and Petty have a 3rd string thing going on. Anderson had 6 catches for 99 yards and continues to be the favorite target of the rookie Petty. He has a decent matchup this week against the Dolphins on Thursday Night Football and should see the most targets on the Jets offense.

Jermaine Gresham STL – Turns out Big Gresh is one of the biggest targets in this hugely disappointing offense. Still one more 5 catch performance has him looking like a low end TE1 for Week 15.