Well we managed to escape this week without a major running back season-ending injury, so far. Eddie Lacy had 5 carries for 10 yards, which is worse than a season ending injury.

DeAngelo Williams is proving that systems and opportunities are most of which matters in terms of putting up large stats. Your Carolina years were pathetic at best. Jonathon Stewart is kind of doing the same now, I am sure that he has talent, it’s just that every team is able to key on the running backs in Carolina because they do not have very many weapons. 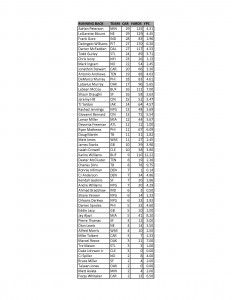 The Raaaaaaaaidders lost again, but as expected they have become a fantasy force. Amari Cooper and Michael Crabtree combine for 25 targets which is only 2 more than Antonio Brown. Speaking of, what the hell was that 17 catches for 284 yards on 23 targets. Hey Jack Del Rio, what do you say, maybe double team Ant Brown?

Owners in the running for the playoffs and DFS players who had Devonta Freeman all were bailed out by his 8 catches as he did absolutely nothing on the ground in SF. Freeman was the only running back to have double digit targets with 10.

Jacob Tamme is the real deal, kind of.  Talk about the right opportunity for a subpar tight end. He should continue to be a target monster for the rest of the way. 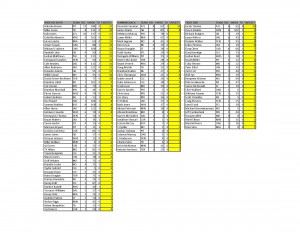 This has to be one of the most confusing years in recent memory. At the midway point it is time to take a look back at the draft and the rest of the way. Injuries are not new to the game of football and this isn’t a study on injuries. Brady Quinn came out and claimed that there is a link between injuries and PED usage, OK, or it is football and these men are giants running 4.4 forties running into each other. So for the sake of this research we will just say that injuries happen and they probably won’t go away, nor will the star players’ injuries ever be minimized.

So let’s look at the mass of players’ ineffectiveness as compared to where they were drafted. The amount of dubbed “ineffective” players is startling. We have been in business for 18 seasons and I can’t remember ever seeing this many “busts” in the first 4-5 rounds of a draft. There has always been a revolving door of first rounders and our rule of thumb is that you can count on half the first rounders this year will be eliminated from the first round of next year’s draft.

Below is a snapshot of the top 50 picks per our preseason Average Cheat Sheet for PPR leagues.

Let’s look at the first round: Bell and Charles are both done for the year while Dez Bryant and Marshawn Lynch have missed significant playing time.

Let’s focus on the yellow Antonio Brown was slapped with the ineffective tab the minute Ben Roethlisberger went down with injury. Ant will likely be fine, but it may be too late in week 9 for a team to recover from missing out on his expected activity.

Eddie Lacy has been an embarrassment so far, he looks like a truck out there and not an F350 mowing over heads but like a Ford Ranger with a shaky transmission. It’s almost like he is not in full football shape yet, and as it gets colder and as the season goes on we expect him to play much better, again, probably too little too late. The biggest piece seems to be the offense not looking like it has in recent years. The loss of Jordy was huge. Cobb and Davante Adams injuries have also negatively impacted this team’s offensive performance. Jordy stretches the field and opens things up for this team to get early leads and lean on Lacy like the chip leader does in a Hold ‘Em tournament.

Demaryius Thomas only has 1 TD through the first half of the season, but he is still doing his thing in PPR leagues.

CJ Anderson doing his best Montee Ball impersonation might be the biggest “bust” of the year. FSC did not fall for it. We didn’t like CJ going into the season and avoided him even in the 2nd round of our Championship league.

Wow. This may have been the worst 2nd round in history. It’s not like Forsett, Green, and Ingram have been lighting the year up either. The 3rd round wasn’t much better if you did not get DeAndre Hopkins.

What is the point that I am trying to make? Well here it goes: you can recover from a couple of bad early picks. This explains how we are in 2nd place in our Fantasy Football Players Championship team despite drafting DaVante Adams, DeMarco Murray and Jamal Charles with 3 of our first 5 picks. It is apparent that the need for “value picks” later in the draft has become more and more prevalent. If you followed our advice you drafted DeVonta Freeman. In season management is extremely important to your chances of winning season long fantasy leagues. There have been so many impact pick-ups every week and if you are not on the wire and making moves then you’re dead. Let FSC help you.

Meanwhile the daily game gets more and more popular every year. Daily will never eliminate the season-long league because everyone loves the draft, but after seeing the results of this top 50 it’s no surprise the popularity is through the roof. Our daily projections page is helping us and a ton of other daily players make some great money this year. How are you doing? 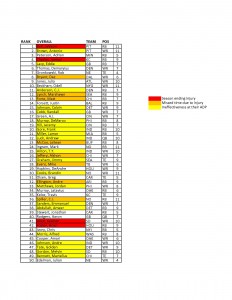 Yes, “Week 9” waiver wire article is up. It’s sad isn’t it? The season just moves so fast, I will say that these 14 hour football Sundays have to end. It is far too much for a guy that cannot refrain from watching every game the NFL sells. It is clear that the NFL and Roger Goodell hate my marriage.

In other sad news we lost one of the best today as Le’Veon bell was declared out for the season with a torn MCL. Based on the first 2 week performance DeAngelo Williams was the biggest “must own” handcuff to any running back in the league. I guarantee that he is available in some leagues.
DeAngelo is worth 100% of your remaining FAAB budget.

The basic rule of thumb is to keep the cost of your pick-up beneath 20% of your total FAAB for any one player. There are always exceptions to this rule (DeAngelo Williams) and it is contingent upon a ton of variables; what week we’re in, situation, opportunity, etc.

Blake Bortles JAX – Blake is coming off a bye week and a quiet offensive performance in Week 7. We like him to post great fantasy numbers (Top 12)  the rest of the way.

Jay Cutler CHI – Even with Forte out for the next couple of weeks, Cutler has a lot of weapons. He plays Monday night against the San Diego Chargers and I would expect a whole lot of points.

Derek Carr OAK – Derek keeps performing like he is here to stay. I am excited to watch how this guy progresses over the next few years. He will have some growing pains in the remaining games facing a few of the better defenses, but he should put up some legit fantasy numbers versus San Diego, Kansas City (twice), Detroit, and Green Bay in week 15 which should be a shootout in Oakland.

DeAngelo Williams PIT – Duh. This is a difference making fantasy starter. You want to see what the owners have left in FAAB and factor what it is going to take to own him, but only if you absolutely need him. I would guess that 90% of leagues out there need a difference making running back in week 9; therefore using all of your FAAB is totally acceptable at this stage of the season to get him.

Jeremy Langford CHI – Jeremy is the backup to Matt Forte who will be missing the next couple of weeks with a knee injury. He has a decent matchup this Monday night against the San Diego Chargers.

Christine Michael DAL – Same story as last week, Michael is worth a stash in deeper leagues. We love McFadden’s talent but we cannot keep total faith in him given his injury history.

David Cobb TEN – The Titans said that he showed up out of shape which is not great, but we still like his chances of taking the reins over Antonio Andrews. The Titans will want to get him involved when he comes back this week to see what he’s got.

Kamar Aiken BAL – Again? Yes, with Steve Smith going down with season (career) ending injury to his achilles tendon opens the door for someone to get the volume in Baltimore. Kamar looked pretty good this week catching all 6 of his targets.

Davante Adams GB – Don’t believe what you saw this weekend. Denver’s defense is the real deal.

Nate Washington HOU – OK, I will eat crow, last week I told you to pick Nate up, but I urged you to not start him. This week he played well again. He has carved himself out a decent role in this offense.

Malcolm Floyd SD – Malcolm has been playing with Phillip Rivers for 23 seasons now, I think. As long as the Chargers continue to play from behind Phil and squad will continue to put up big fantasy numbers, and Floyd will have some hit or miss games down the stretch.

Vernon Davis DEN – This was a smart and interesting trade for the Broncos. Well last week we said to grab him, but now it seems like a must add in most leagues. The Broncos aren’t what they once were in terms of a reckless passing team, but Vernon will fit in nicely as a 2nd or 3rd passing option for Peyton down the stretch.

Heath Miller PIT – It was an ugly bunch of weeks for Heath while Big Ben was out recovering from his knee sprain. Well Ben is back and Heath is sure to pick up some of the Le’Veon Bell void in the short pass game.

Ben Watson NO – After a huge night a couple of weeks ago we all chalked the performance up as an anomaly. Ben Watson, ladies and gentlemen, has found the fountain of youth by landing in Drew Brees target land. Grab him if he’s still available. He is a total target monster.

Austin Seferian-Jenkins TB – Austin should be returning from shoulder injury this week. ASJ was well on his way to a great season before going down a few weeks back. Great speculative add, but keep in eye on his shoulder when he returns.

Jerome Simpson and Brian Hartline are two of the unlikely 10+ target candidates for the week. Don’t get to excited game scheme, play calling and game scenario dictates most of these results. It is interesting to see the patterns of how teams are utilizing player’s week over week when searching for a PPR pickup.

Darren McFadden had 8 targets and 20 carries. That’s the kind of dedication to Run DMC that could make him a top 10 RB on the year and a possible top 5 from here on out. Heath Miller is back as a starting fantasy tight end. Stefon Diggs is the real deal with 12 targets and again a great performance. 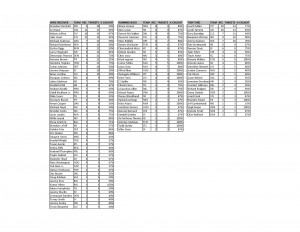 This week saw a total of 10 running backs over the 20+ carry mark. The running back position is beginning to look ugly, far too many injuries. Sad to see Le’Veon Bell go down for the remainder of the year with a torn MCL. Bell is truly one of the most fun runners to watch in the league. His patience, vision and elusiveness are incredible. Tough sport, it looks like Matt Forte will miss a couple of games with a knee injury.

Chris Ivory had 15 carries for a total of 17 yards. Just one of those days, huh, Chris? Todd Gurley, please stay healthy, you are a throw-back to the position that has been forgotten by many teams in recent years. 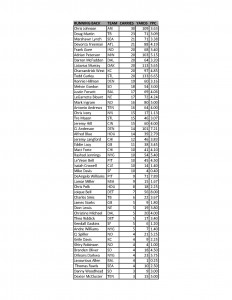